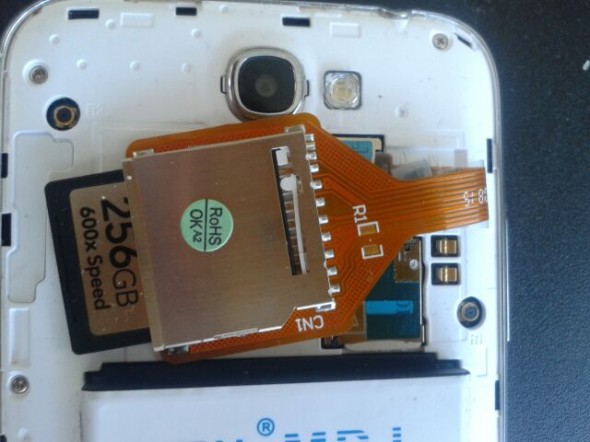 We all want something more than what our smartphone can give us. Tow aspects that usually come up in our list of wants is more battery life at pole position and more storage space following up at a close second. Manufacturers do offer some compromise but pushing the envelope with mass storage on board plus the ability to add on more with memory cards. But here’s a story of one guy who just couldn’t suffice with what was by the norm. Taking his tools to the Galaxy Note II, this guy has successfully been able to boost the capabilities of the device to a very large extent. He’s managed to replace the existing 3100 mAh battery with an 8500 mAh option and found a way to hook up a 256GB SD card to9 add on storage space boosting it to 288GB.


The rear panel of the handset required some modification to accommodate the new additions to the hardware so naturally; this particular Note too isn’t as svelte as what you’d get off the shelf. This developer has even been kind enough to show us how he did and it might not be as hard to do as one would image. Of course, you better be prepared to haul around a much heavier and bulkier device, way more than what one already bargained for with the standard Note II itself. The developer made these modifications on the N7102 model which is the Chinese edition that also offers Dual SIM support.

With this whopper of a handset you should have enough juice to last you more than a few days with rigorous use. Let’s just hope the battery doesn’t heat up to quickly. And with that much storage carting around your media will also be a non issue. Kudos to the genius minds that love to tinker with existing tech only to make it better. On if only someone would help me with my Nexus 4!